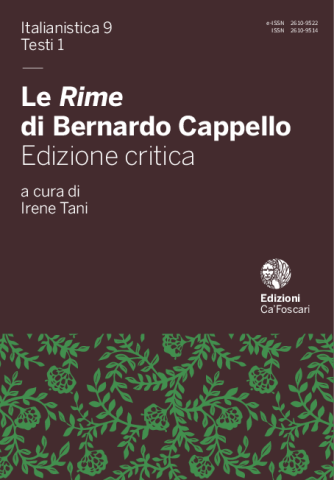 Bernardo Cappello (Venezia 1498 ca.-Roma 1560), member of one of the oldest patrician families of Venice, played an active role in the politics of the Venetian Republic, until his exile in 1540. After that, he became a collaborator and a protégé of cardinal Alessandro Farnese, who is one of the most significant figures of the century. Then he took refuge in Rome, where over the years he held varied appointments. Since his youth and in parallel with his political career, Cappello constantly devoted himself to humanistic studies and to rhymes production: pupil of Pietro Bembo, interlocutor of Giovanni Della Casa and close friend to Bernardo Tasso, the author is among the greatest exponents of the sixteenth-century Petrarchism. For the first time the critical edition of Rime by Bernardo Cappello is here given, namely the book of 353 compositions that the author elaborated on the pattern of Bembo’s directives, over a large period of time. In his book of poetry (canzoniere), through lyrical pieces, the author creates his own existential and biographical path. Regarding the evolution of the architecture of Cappello’s collection, four witnesses survived, in which we distinguish different phases: the first one is genetic and manuscript (Roma, Biblioteca Casanatense, 277), with addition of corrections that generally are close to the textual variants of the princeps; the second is the print of 1560 for the press of the Guerra brothers; finally, a further evolutionary stage is represented by two postillated prints. To these witnesses a rich miscellaneous tradition is added, which, for a large number of rhymes, restores the elaborative complexity through multiple genetic forms. Poems ousted from the ancient print, but part of the canzoniere in other phases of composition, are included in this critical edition.