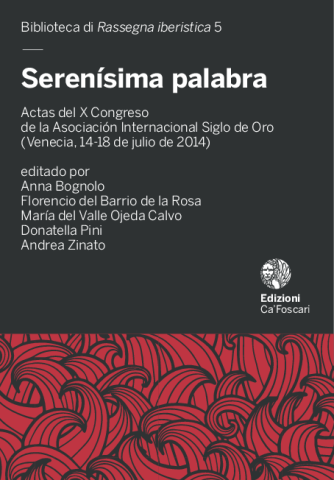 From the 14th to the 18th July 2014, more than 200 scholars, coming from 21 countries and belonging to 126 universities, centres and institutions, met in Venice to celebrate the X International Conference of the Asociación Siglo de Oro on the occasion of its 25th anniversary. These pages comprise the better part of what was said after the contributions underwent the peer-review process prior to their publication.
The conference’s content was divided into three sections: the first one collects the five plenary conferences, whereas the second one the “Moved Recollection of Isaías Lerner on the 25th Anniversary of AISO”; finally, the third section includes the contributions.
The latter are subdivided into five other sections (“Poetry”, “Theatre”, “Prose”, “Language and Translation”, “Miscellany”), which mirror the multidisciplinary character of the meeting.
As a matter of fact, the cultural and historical aspects of the Hispanic world of the XVI and XVII centuries that were dealt with in the contributions, as well as their success nowadays, significantly vary.