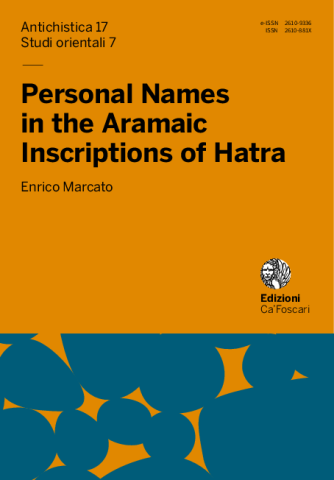 Hatra, the famous Northern Mesopotamian ‘city of the Sun-god’ that thrived between the 1st century BC and the 3rd century AD, is a remarkable source of information on Parthian Mesopotamia.
This book offers a comprehensive linguistic evaluation of the 376 personal names attested in the roughly 600 Aramaic inscriptions of Hatra, the famous Northern Mesopotamian city that flourished in the Parthian age, between the 1st century BC and the 3rd century AD. This study benefits from the publication of many Hatran inscriptions during recent decades, which have yielded rich onomastic data, and some fresh readings of these epigraphic sources. This work is subdivided into three main parts: an “Onomastic Catalogue”, a “Linguistic Analysis”, and a “Concordances Section”. The “Catalogue” is organized as a list of entries, in which every name is transliterated, translated (whenever possible), discussed from an etymological perspective, provided with onomastic parallels, and accompanied by its attestations in the Hatran Aramaic corpus. The “Catalogue” is followed by a “Linguistic Analysis” which describes, firstly, the principal orthographic, phonological, morphological, and syntactical features of Hatran names. The linguistic discussion proper is followed by a semantic taxonomy of the names which make up the corpus and an overview of the religious significance of the theophoric names. “Charts of Concordances” end the book.