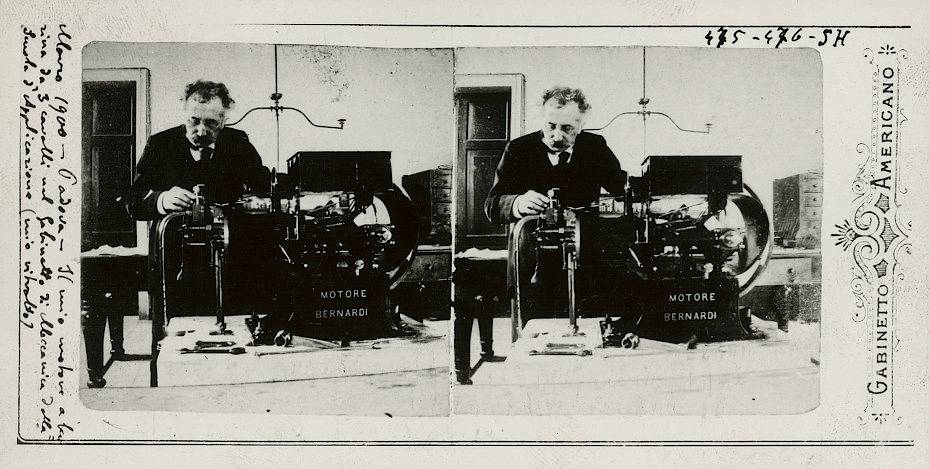 Stereoscopic print of Enrico Bernardi and his 3-horse power engine.. Caption handwritten by Bernardi himself: “My 3hp petrol engine in the Cabinet of Mechanics at the School of Application (my portrait)”.
University of Padua, “Enrico Bernardi” Museum of Machines.

The documents represented here belong to the archive of Enrico Bernardi, which is connected to the University’s “Museum of Machines”. They were previously on display at the Department of Industrial Engineering.

Enrico Bernardi (Verona, 1841 – Turin, 1919) graduated with a degree in Mathematics from the University of Padua in June 1863. In 1877, he returned to the university, to take up the “Chair of Machines”. From 1879 to 1915, he held the position of director at the “Institute of Machines” (originally the Gabinetto, and subsequently the Istituto di Macchine).

The University of Padua’s “Enrico Bernardi” Museum of Machines was inaugurated on 20 May 1941 to mark the centenary of Bernardi’s birth. The bequest of the collection included the stipulation that the museum be housed in the Institute of Machines, which at the time was in via Marzolo. Having moved to its current home in via Venezia in the 1970s, it was brought under the direction of the Department of Industrial Engineering in January 2011.
The items in the museum are of great historical and cultural importance since they provide a flawless account of the evolution of the internal combustion engine, a process that began in the latter half of the 19th century in response to the unbridled industrial development of the age and the resulting need for greater power. In fact, the museum houses several specimens of Bernardi’s engines (“built with my own hands” as he declared in 1894 while presenting these very working specimens to members of the Veneto Institute of Science, Letters and Arts). They employ various approaches devised in those years to converting the thermal energy liberated by the combustion of various types of fuel into mechanical power: from the “atmospheric” engine (Barsanti and Matteucci, 1854) to the direct-drive (Lenoir, 1860) and four-stroke engine (Otto, 1877). In recent years, most of the engines on display have been restored to working order following Bernardi’s own, hand-written notes, which are also kept at the museum. 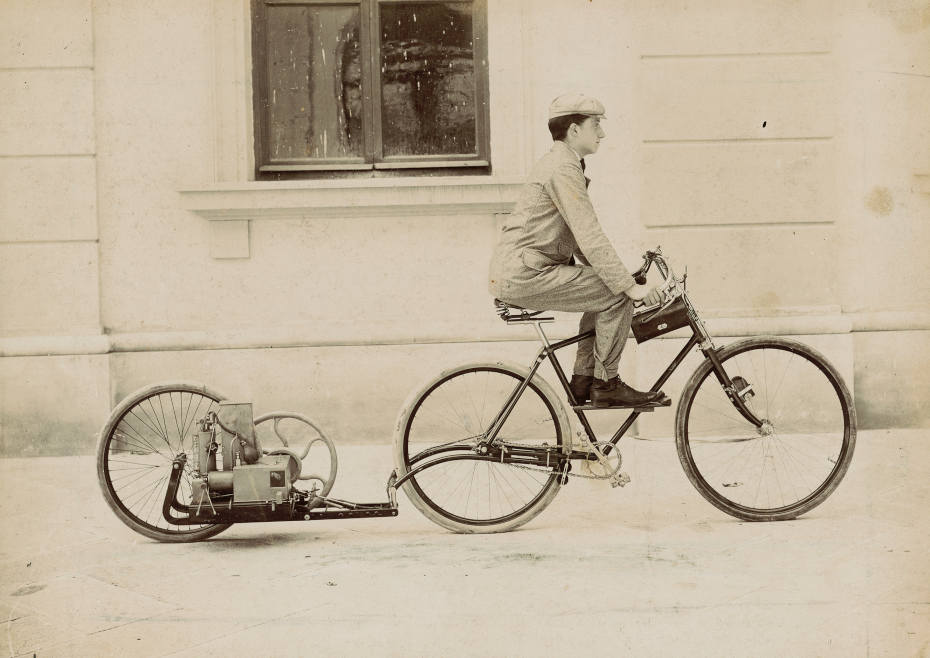 The collection represented here in digital form consists of 38 photographs, 10 hand-written documents, 7 letters, 4 personal documents, 21 pamphlets and 4 posters. The originals are kept at the University of Padua’s “Enrico Bernardi” Museum of Machines.
With hand-written technical notes, scientific publications, and applications for industrial property rights, these archive sources not only document Prof. Bernardi’s research activities, but also offer an insight into his entrepreneurial ventures.
The engines invented by Bernardi found applications in various fields before they were used in cars. For instance, a poster promoting the “Pia” petrol engine calls it the smallest industrial motor in the world […] a support to small firms, an aid in running the household, and an assistant at school. 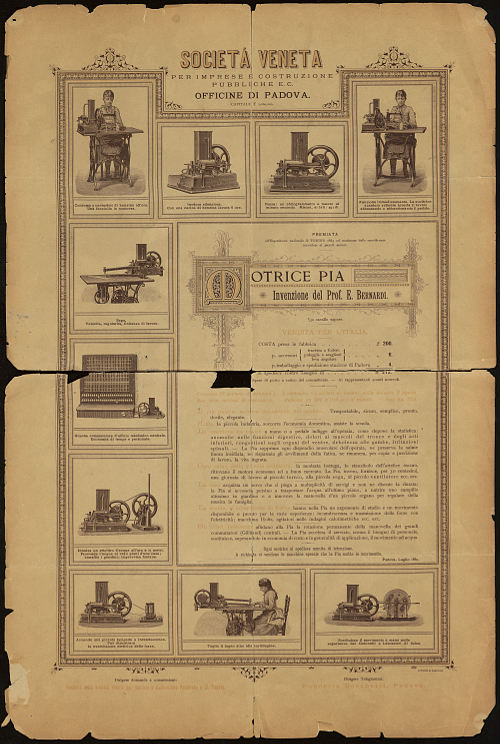 The “Pia” engine. Poster issued in 1887 by the Società veneta per imprese e costruzione pubbliche, Officine di Padova to advertise all of the possible industrial and domestic applications of the “Pia” engine.
University of Padua, “Enrico Bernardi” Museum of Machines.

Alongside the written sources, there are photographs that provide a visual record of Bernardi’s work, such as that of the three-wheeled “car” built in Padua by the Miari & Giusti company in 1894, with its 42-2 registration plate. The vehicle registration document is still held in the archives of the Padua branch of the Automobile Club d'Italia. The car itself still works and, driven with the original set-up, can make good progress on a reasonable road surface. It is seen here driven by Antonio Nosadini, a technician who worked with the Miari & Giusti company. 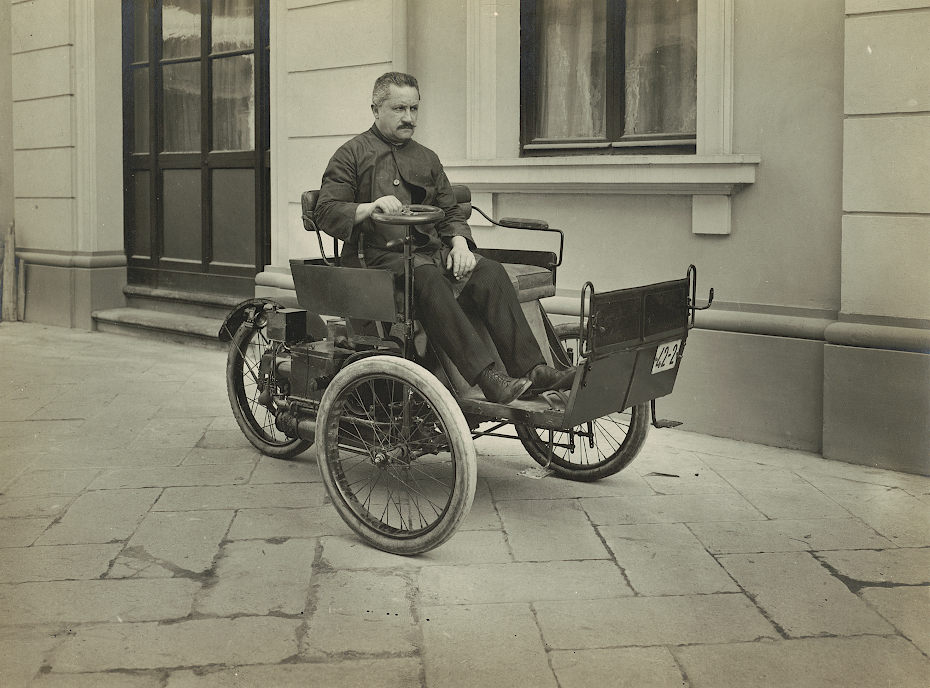 Photograph of the Bernardi internal combustion engine “car” with its “42-2” number plate..
University of Padua, “Enrico Bernardi” Museum of Machines.