Cinematecnica. Conversations about the Art of Cinema

The collection, conceived as the final project of the first level Master in "Digital Humanities" of the Ca’ Foscari University of Venice, is inspired by the video recordings of a series of courses organized by the Venice Film Industry Office and the Department of History of the arts and conservation of artistic heritage "G. Mazzariol ”from 1993 to 1998.
During the lectures, held in the autumn season, a particular aspect of the cinema was analyzed in its "making" (framing, storytelling, interpretation, editing, direction, light).
The collection, which includes 20 videos subjected to a digital conversion process, reports almost all of the meetings, minus someone who missed the call at the time of the reconnaissance within the VHS archives of the Departments of Humanities (DSU) and of Philosophy and Cultural Heritage (DFBC) of Ca 'Foscari.

The cycle of lectures, known as "Cinematecnica", by the will of the organizers, places the emphasis on dual nature skills: 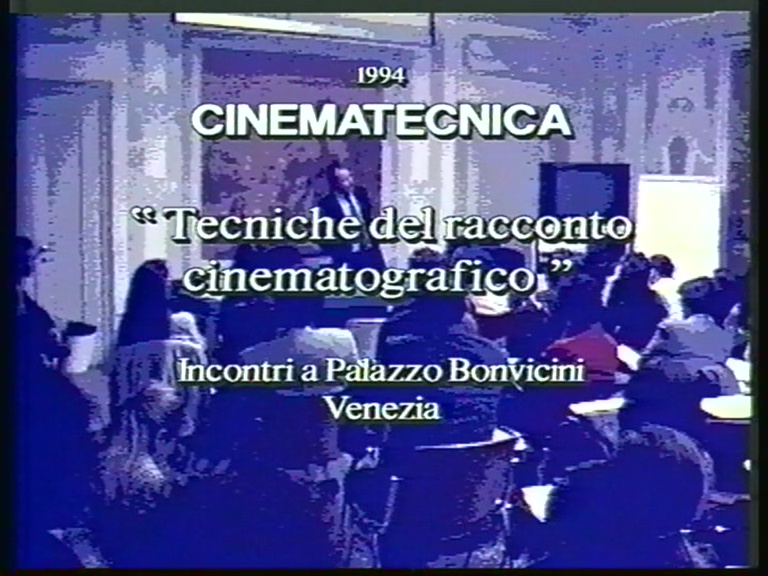 The merit of the organization of the conferences is given by Professor Fabrizio Borin and Professor Roberto Ellero, who have invited to tell and to tell themselves, year after year, a series of personalities from the world of cinema: from the directors Cristina Comencini, Daniele Lucchetti, Enzo Monteleone to professors Paolo Bertetto, Mario Brenta, Carmelo Alberti, including film editors, cinematographers, historians and art historians.
The results of the courses were collected annually in the notebooks of the "Circuito Cinema" series, many of which are now impossible to find.

In 2001 some of the speeches were reported in a volume entitled "Cinematecnica. Percorsi critici nella fabbrica dell’immaginario" published by Bulzoni Editore. We therefore leave to the words of the organizers themselves the task of further clarifying the intent underlying the realization of this event and the consequent reason why it seemed important to us to digitize it for didactic and cultural purposes.


"The full recognition of the film as a "cultural asset" in recent decades has allowed film critics to overcome ancient, unresolved and sometimes purely idle dichotomies between "art "and" industry ". [...] If art and industry are resolved dialectically in the synthesis of the film as a cultural asset, on the technical modalities of making films, there is still a lot to think about. If in a purely theoretical context there is no one who does not agree on the decisive importance of the technical aspects and technological components in the production process that transforms ideas into films, according to a process of transformation precisely for the industry, in the practice of much history and much criticism of the cinema the technique remains an unexplored territory and an often disregarded one. A place to enter with caution many times for mere cultural or documentary obligation, few others out of curiosity. A semi-elitist attitude halfway between the ancient contempt and some performances of the unconventional contemporary arrogance. [...] So it is worth remembering that next to the no less fundamental "what to do" there is still "how to do it", because fantasy always rests on the virtues of technique."