For.Ma. The Forgotten Manuscripts – The forgotten manuscripts of the Biblioteca Universitaria di Padova (numbers 688 and 941)

Initial letter of Ms. 941, c. 35v. The U of Ulpianus, which opens book IV, is represented by a seated male figure, whose left hand clutches three snakes. The image may depict Hercules fighting the Hydra of Lerna.

‘For.Ma. – The Forgotten Manuscripts’ is a research project launched by the Department of Private Law and Critique of Law of the University of Padua thanks to the financial support of the Fondazione Cassa di Risparmio di Padova e Rovigo, which awarded it as one of the 'Projects of Excellence 2017'. The project intends to study and enhance two precious and almost forgotten twelfth century manuscripts preserved at the Biblioteca Universitaria di Padova, which contain some parts of the Corpus Juris Civilis, the monumental collection of Roman legal texts created by Justinian in the sixth century AD. 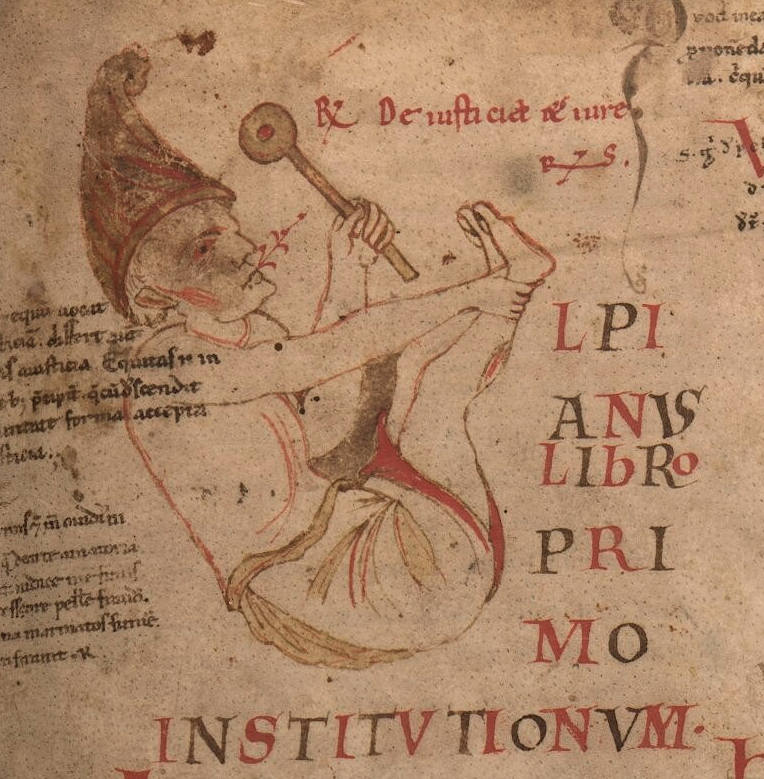 Initial letter of ms. 941, c. 3r. The U of Ulpianus, which opens book I, is rendered through the semi-clothed figure of an insipiens, wearing a Phrygian cap and with rattle in his hand, who is humming.
The textual vicissitudes of the Justinian Corpus during the Middle Ages still present different problematic profiles, on which modern historiography has only partially succeeded in shedding light. After the research conducted at the end of the 19th century by the German historical school and by masters of the calibre of Theodor Mommsen and Paul Krüger, which culminated in the complete edition of the Corpus, few other scholars have dared to tackle the subject again. It took time for the idea to be accepted that some aspects of their research could be remedied, and that new perspectives of investigation deserved to be explored. In particular, more than one person pointed out that some medieval manuscripts containing parts of the Corpus had been examined in a certain summary way, or neglected altogether (albeit consciously and in line with the ecdotic principles followed by the two German scholars).

Two of these manuscripts are kept at the Biblioteca Universitaria di Padova.

One of them, marked with number 941, contains the first 24 books of the Digest, in its Bolognese (or Vulgata) version. It corresponds to the so-called Digestum vetus, i.e. the first of the three parts into which the Digest was divided (and circulated) during the medieval age. If we exclude the well-known Codex Florentinus (dating back to the VI/VII century A.D. and containing the entire text of Justinian's Digesta), there are only three other manuscripts in the world, relating to this part of the Digest, as old as the one from Padova: they are kept in Paris, Leipzig and in Vatican City. 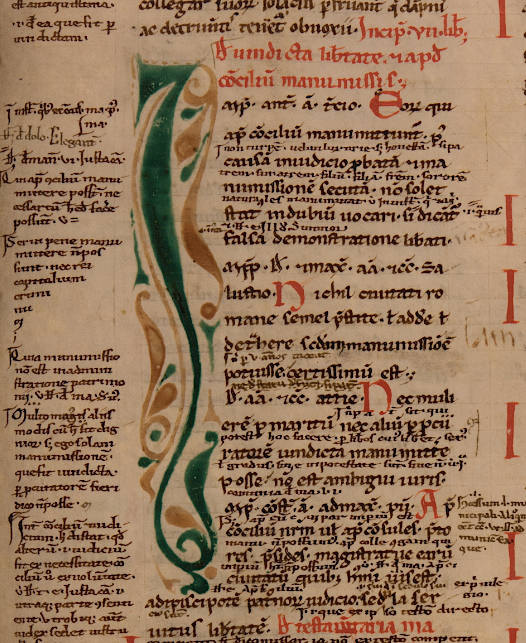 Decorated initial letter of ms. 688, c. 134r.
The other manuscript of interest, n. 688, contains the first 9 books of Justinian's Codex repetitae praelectionis. It is one of the oldest surviving testimonies of the complete version of the first 9 books of that work, and not of the 'reduced' one, known as Epitome codicis, which was widely distributed during the Middle Ages. Nevertheless, Paul Krüger did not consider this manuscript for his editio maior of the Codex, dating from the year 1877.

An essential part of the For.Ma. project is to make these manuscripts freely accessible to scholars and enthusiasts, through their digitization and online uploading, as well as through the publication of two facsimile reproductions.

This will be accompanied by a study dedicated to their characteristics, their history, the role played in the transmission, dissemination and interpretation of the Digesto and Codex in the Middle Ages (especially in northern Italy and Padova), their position and relations with other manuscripts of the same period that contain the same texts, their relevance to the teaching of Roman law at the University of Padua and finally their importance in the process of preparing the modern editions of the Digest and the Codex, edited by Mommsen and Krüger.

The Principal Investigator of the project is Prof. Paola Lambrini, Professor of Roman Law at the University of Padua.

Initial letter of Ms. 941, c. 193r. The U of Ulpianus is made up of a curved leafed shoot, in the centre of which stands out the figure of a bearded knight wearing a mesh, on a perfectly harnessed horse.