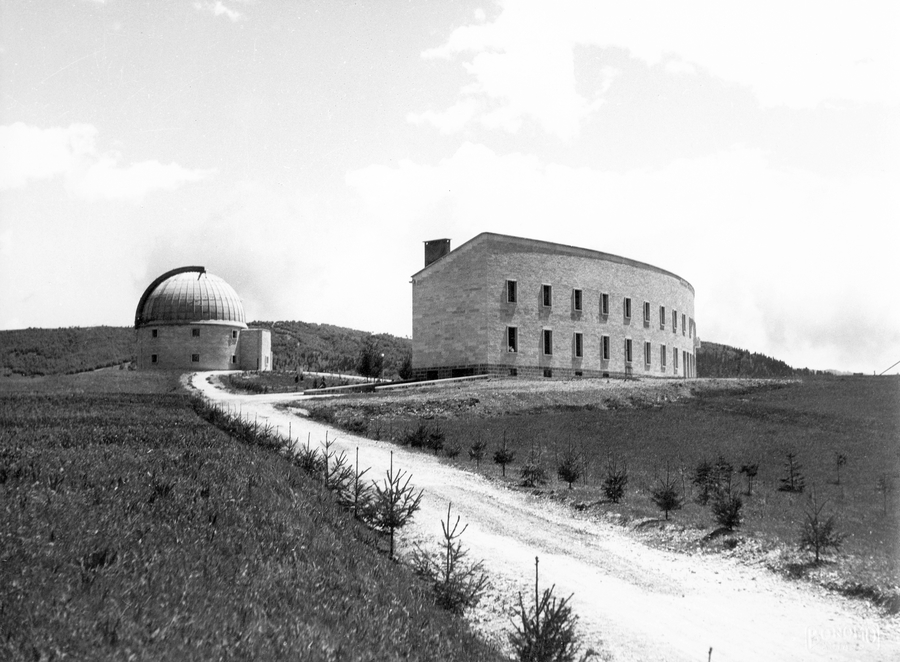 On May 27th, 1942 the Astrophysical Observatory in the Asiago plateau was inaugurated. The astronomic tradition of Padua University dates back centuries ago: in 1767 an observatory was built on the massive tower constructed by Ezzelino da Romano in 1242 to defend his castle.

“The concept that Padua should be worthy of its Galilean tradition, led Anti [rector, i. e. the head of the University of Padua, at the time, editor’s note] and Silva [professor of Astronomy and director of Padua Observatory and of the Asiago one] to find the most suitable location on a high ground as the Asiago plateau, to avoid the lower layers of the atmosphere which usually are the most perturbed and less transparent, and to realise the buildings and the instruments needed by a modern astrophysical observatory [...] an observatory equipped with those instruments most suited to modern research on physics of celestial bodies, and therefore is called «astrophysical».”

The two buildings were built by the technical department of the Consortium of the University of Padua, the plans were made by architect Daniele Calabi, while the telescope and the revolving dome were made by Officine Galileo. 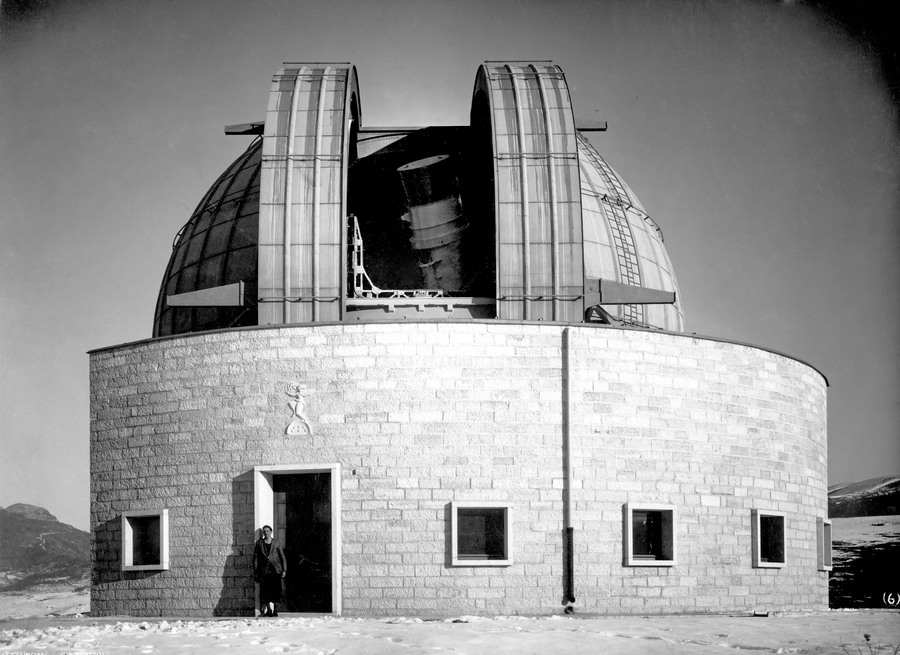 The collection contains many photographs which tell the Observatory’s genesis, starting from plans and models made by architect Daniele Calabi. The Observatory consists of two buildings: the observation tower, placed on the highest spot of the ground, and a building with the offices and the residences of the astronomers. 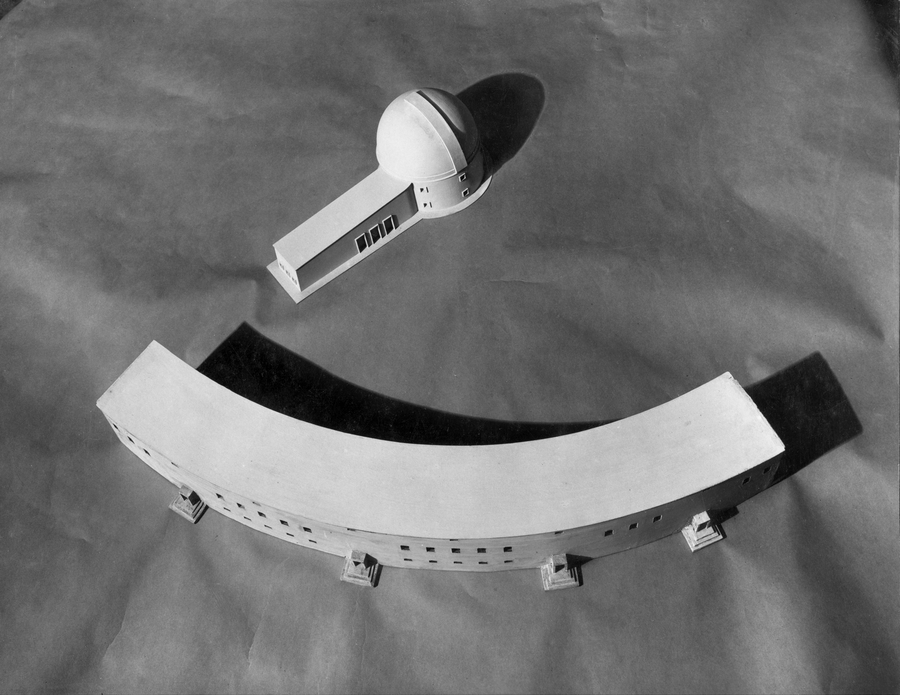 The collection continues with the photographs of building yard, made by Calabi himself. The two buildings “are entirely constructed in pink-grey ashlar masonry, extracted from local caves [...]” (Silva 1942). 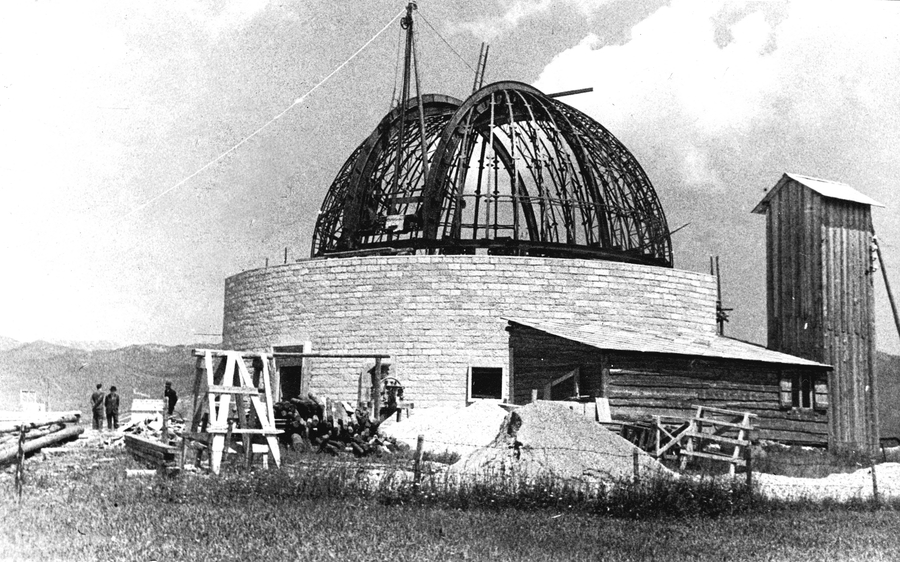 The telescope was made by Officine Galileo together with a technical committee of Padua University. The choice was for a telescope with a parabolic reflector, because it answered well the needs of a universal instrument; which, with the application of simple transformations and accessory swappings, would allow different configurations. The first one is the so-called “Newtonian telescope”, which has the 122 cm concave primary mirror coupled with a flat 45° inclined secondary mirror, obtaining a focal length of 600 cm. The second configuration, called the “Cassegrain reflector”, couples the parabolic primary mirror with a hyperbolic secondary mirror that reflects the light back down through a hole in the primary, thus getting a focal length of 1913 cm.
The telescope is mounted on an English cross axis mount. 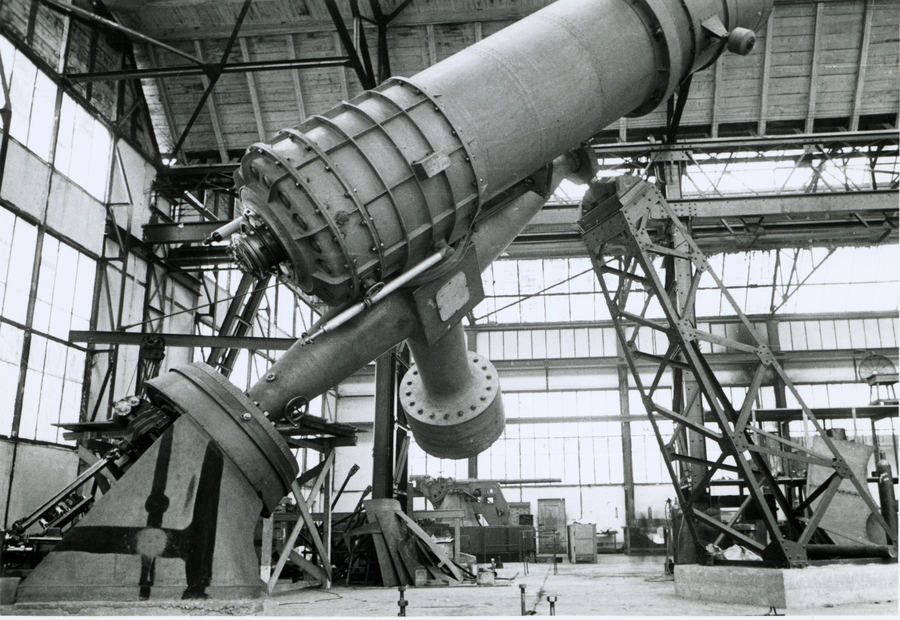 The collection also comprises a few sets of photographs, taken by renowned local photo studios to document the opening ceremony, the first astronomers to work in Asiago, and a selection of the instruments equipping the telescope. Among them, there’s a remarkable one: a custom made spectrograph with four chambers and two prisms, which can change, with just a few mechanical movements, the configuration of the optics, as if it were four different spectrographs.