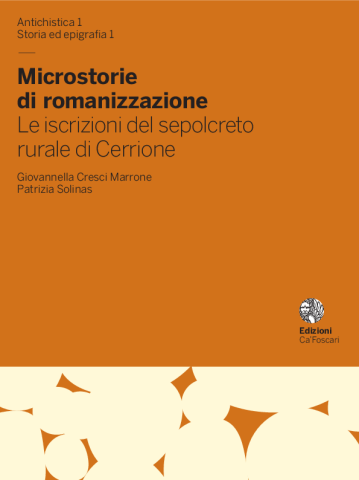 This volume contains the edition and commentary of sixty funerary inscriptions found at the
archaeological site of Cerrione in the province of Biella, in north-eastern Piedmont, near the
Bessa ancient gold district, in the territory once belonging to the Roman colony of Eporedia.
Seven inscriptions were written in the so-called Lepontic alphabet, while fifty-three were written in the Latin alphabet. All these inscriptions were found in a rural necropolis, which appears
to have been used from the early first century BC to the late fourth century AD. More than two
hundred tombs were brought to light in this necropolis of which about eighty were marked with
stone slabs. The burials that are identified by inscriptions can be dated through their archaeological contexts to a period that goes from the early first century BC to the third century AD.
Studying these epigraphic texts with special attention to onomastics allows the book’s author to investigate the juridical status, the social ranking, the family networks, and the ethnic
identification of the people who were buried in the tombs. Furthermore, the analysis of the
graphic and linguistic features of these funerary inscriptions facilitates the understanding of
the characteristics and the peculiarities of the cultural transition that this area went through
when they were written. In fact, not only does this work offer a socio-cultural investigation of
the individuals who lived in this settlement and made use of its cemetery, but, reconstructing
a number of micro-histories, it also contributes to understanding the dynamics of the contacts
between the indigenous Celtic element and the exogenous Roman influence. The meeting of
these two different cultural systems gave birth to the phenomena of hybridization and transition
that eventually led to the Romanization of this area.

Following objects are referencing this object (2)