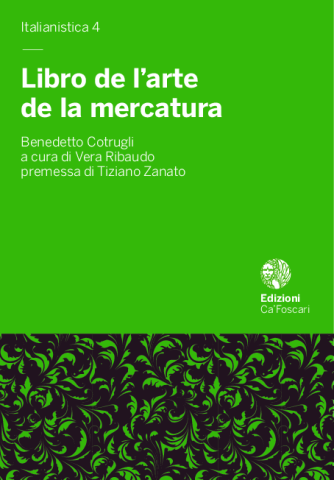 This edition is part of a project connected with the celebration of the 150th anniversary of the foundation of Ca’ Foscari University. The project also includes the publication in English (by Palgrave Macmillan of London) of the critical edition of the treatise by Benedetto Cotrugli, the merchant and humanist from Ragusa (Dalmatia) who composed it in Naples in 1458. The edition is based upon the examination of all the existing tradition: three manuscripts from the Fifteenth century and a print of the Sexteenth century. Special attention is given to a codex kept at the National Library of Vallette (Malta), transcribed a few years later after the treatise was drafted, also in Naples, by a person of the same area as the author, a merchant himself, too. It is now possible to refer to a text which is extremely close to the original. Indeed, it keeps the peculiar linguistic features and gives its deserved place of prominence to a text which boasts a leading position in various fields, not only from the point of view of the history of accounting – the book contains the first description of the method known as ‘double entry accounting’ – but also from the cultural point of view, as it is the first treatise written in vulgar spoken in the Naples of the Aragonese kings. It is, above all, the first text to place a profession in a central position. The book depicts a portrait of the merchant which is an ideal and realistic at the same time, highlighting his political role and presenting it as a key figure in the society of the time.