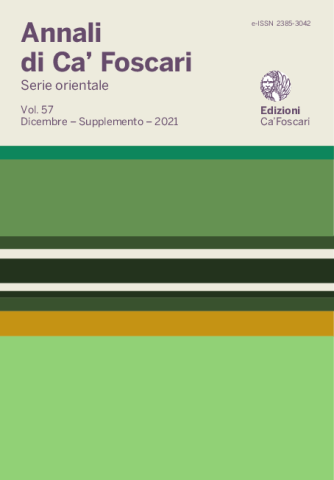 This special issue of Annali di Ca’ Foscari. Serie orientale gathers scholars from various disciplines (history, art history, philology, Mongol studies and arms and armour specialists), in order to spur dialogue on the development and history of Tibetan weapons, and add new avenues of research on this topic, in the footsteps of the pioneering 2006 exhibition Warriors of the Himalaya (Metropolitan Museum of Art). Initially based on a workshop entitled Defence and Offence: Armour and Weapons in Tibetan Culture, organised in 2019 in Paris in the framework of the ERC-funded project The Tibetan Army of the Dalai Lamas, 1642-1959, this monographic issue starts from the observation that the theory of the ‘military revolution’, which for more than half a century has stimulated a reassessment of pre-modern and early modern European history, is still completely untested in the field of Tibetan studies. In particular, the impact of firearms innovation on the evolution of society has not been made for Tibet. The issue endeavours to build the ‘first missing link’ that would allow further analysis on this topic, by proposing five studies documenting the great diversity of weapon technology (and their corresponding terminology) that were used in Tibet, from the bow and arrow in the 7th century to the machine gun in the 20th century, by way of the famous Tibetan matchlock. Based on a great diversity of sources (material, visual and textual, such as archival, historiographical, biographical and autobiographical), the five chapters, authored by Donald La Rocca, Petra Maurer, Tashi Tsering Josayma, Federica Venturi and Alice Travers (with an additional preface by Johan Elverskog) answer, from a variety of perspectives and chronological angles, the following questions: which weapons did the Tibetan use, where did they come from, when were they used, in which circumstances, and what influence did they have on Tibetan society and history?