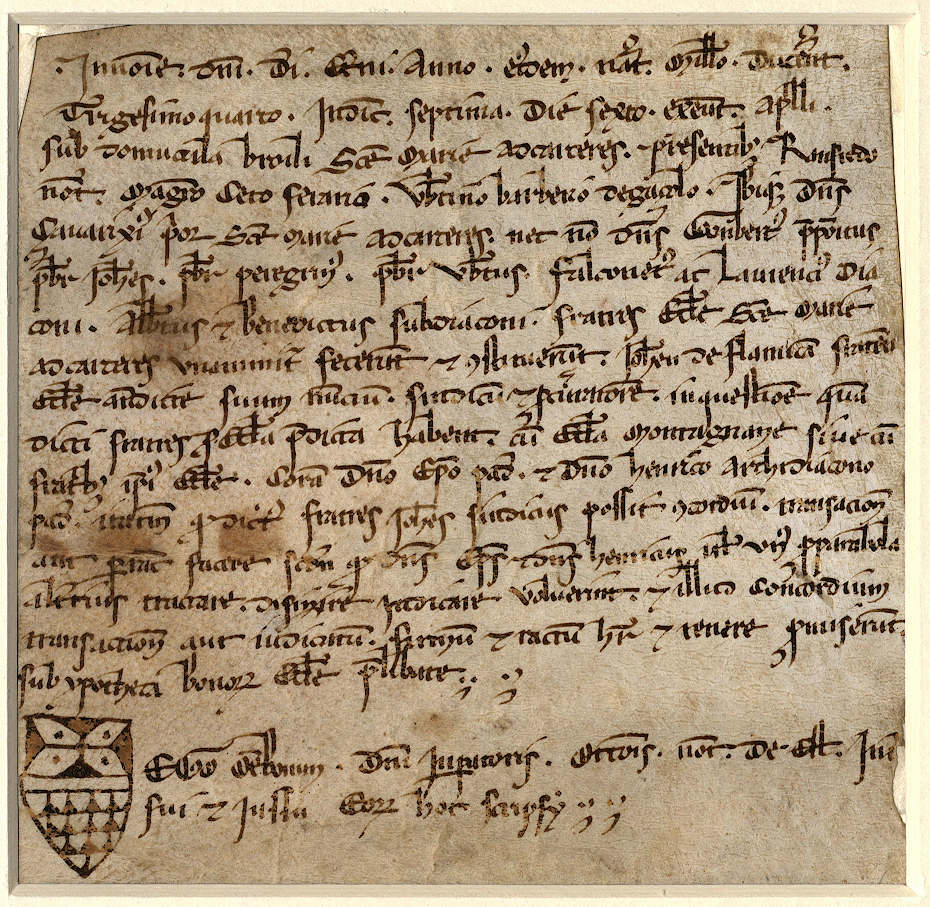 This miscellanea comprises 30 loose parchments that belonged to the archive of the Abbey of Santa Maria delle Carceri, a monastery of Augustinian Canons with links to the Marquises of Este. They are part of a larger collection of parchments that came under the auspices of the Chair in Palaeography at the University of Padua’s Institute of Palaeography in the early years of the 20th century and that is now kept in the History Library of the Department of Historical and Geographic Sciences and the Ancient World.
These parchments represent a small part of an archive collection that was partially dispersed after the abbey (which was by then in the hands of the Camaldolese Congregation) was expropriated by the Republic of Venice in 1690 with the consent of Pope Alexander VIII and auctioned off to finance the war with the Turks.
The documents themselves constitute an invaluable resource in the study of local history and medieval toponymy. They relate to the controversy over the rights to tithes from the ancient territory of Scodosia – the south-west section of the Province of Padua – during the period 1199 to 1236.

This digitised collection marks the culmination of a teaching and research project that was started in the 1990s by Palaeography academics from the University of Padua, and that saw the publication, in 2001, of the volume “Le pergamene del Dipartimento di Storia dell’Università di Padova: 1199-1236” (“The parchments of the Department of History at the University of Padua: 1199-1236”).


1. Assessment of the condition of the parchments

Assessment of the materials confirmed the need for a preliminary conservation phase before the parchments could be digitised; they were badly dehydrated and had been kept rolled up, conditions that could have made effective digitisation problematic, and may even have threatened the integrity of the parchments during the scanning process.

Having completed the necessary paperwork and completed the other steps required by the regulations, and having thus obtained permission to proceed from the archives office of Veneto region, the parchments were subjected to conservation treatments that lasted for around a month. The results were subsequently verified and approved by the same regional office.

Given the size and delicate state of the material, it was decided that the digitisation work should be outsourced to a specialist firm in order to guarantee safe handling and the quality of the result.
Each document was digitised recto and verso using a large-format (A1) flatbed scanner. This was done at the premises of the History Library to keep the movement of the material to a minimum, and to ensure it was handled appropriately.

In order for the artefacts to be correctly described within the Phaidra system, a preliminary study of digitisation projects conducted by other Italian institutions was carried out to help identify the appropriate metadata.
After the metadata had been mapped between Phaidra and other archive databases, the project team proceeded with identifying the relevant data for each document by sourcing the information in Le pergamene del Dipartimento di Storia… and, having consulted the project’s academic leader, formatting it to fit the Phaidra configuration.

5. Archiving and online publication on the Phaidra platform

It was decided that, to facilitate accessibility, all document formats would be archived on the Phaidra platform in the form of JPEG files with a resolution of 300 DPI. Images of both the recto and verso of each document were included.
The digital objects in the collection were created, one at time, by members of the project team.
Separate recto and verso objects were created for each parchment and linked so as to create a single virtual document with a “front” and a “back”.
The Phaidra page for the collection has a link to the entry for the aforementioned publication on the catalogue of the Padua Library System and, vice versa, a link in the catalogue entry opens the relevant collection page in Phaidra.