Theatre of the world: atlases in the Geography Library’s collections 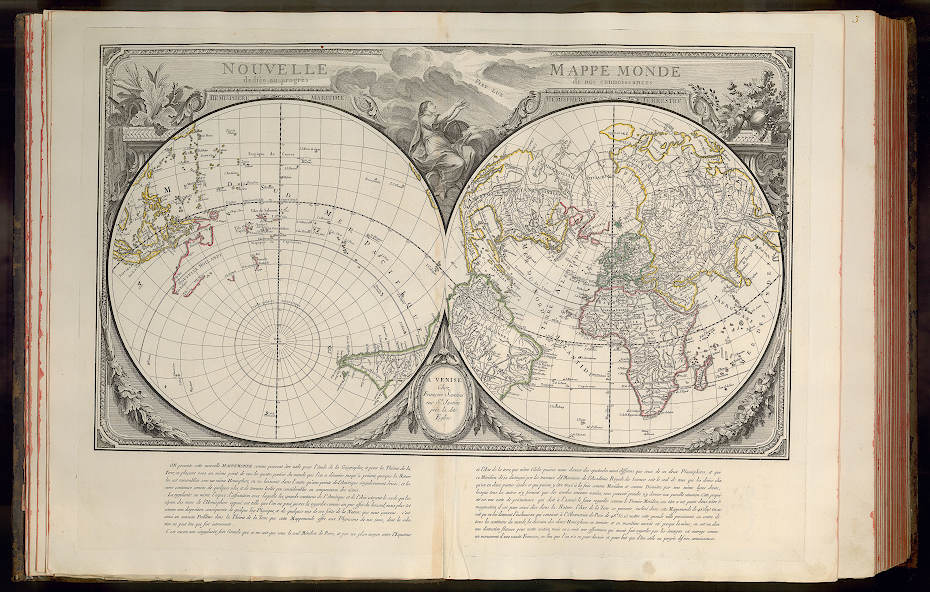 We can say that, preferring the “virtual” travels to the real ones, a bit like it happens today surfing the web, the first geographic atlases started developing a concern for the discovery of real places, offering however an overlook, a support, destined to influence the curiosity and the itineraries of the future travelers.
— Mangani, 2007

The chair in Geography established by the University of Padua in 1872 was the first one in Italy. The great cartographic and bibliographic heritage collected by the Library throughout 140 years of academic life has a big scientific value, but it can’t be fully accessible – for obvious reasons regarding preservation and security. Therefore we’ve decided to make available to the researches the digital version of a part of Library’s fine collections, choosing at the same time the rule of full usability of the published documents. As a matter of fact, all the digitized objects are available and downloadable with the best resolution – in order to constitute an effective help to academic research and not just a list of previews.

Theatre of the world is the first outcome of this plan and, first of all, it would like to retrace the evolution of geographic atlas in the Western culture, from the late Renaissance to the first half of 20th century. It’s not by chance that the title of this collection originates from Abraham Ortelius’s Theatrum Orbis Terrarum published in Antwerp in 1570, which is considered the first modern atlas. Indeed for the first time all the figures have same size, uniform style, identical planning of the cardinal points and the grid always beginning from the same starting meridian (Messina, 1991).

Our library possesses the so called Edizione Lovisa (Venice, 1724) of the Theatrum: a pocket and late version which anyway gives a clear idea of the break represented by Ortelius with respect to Medieval cartography, like that of Mappamondo Borgiano. A cartography more interested in representing symbolic-religious concepts than in making geographic and astronomical measurements. 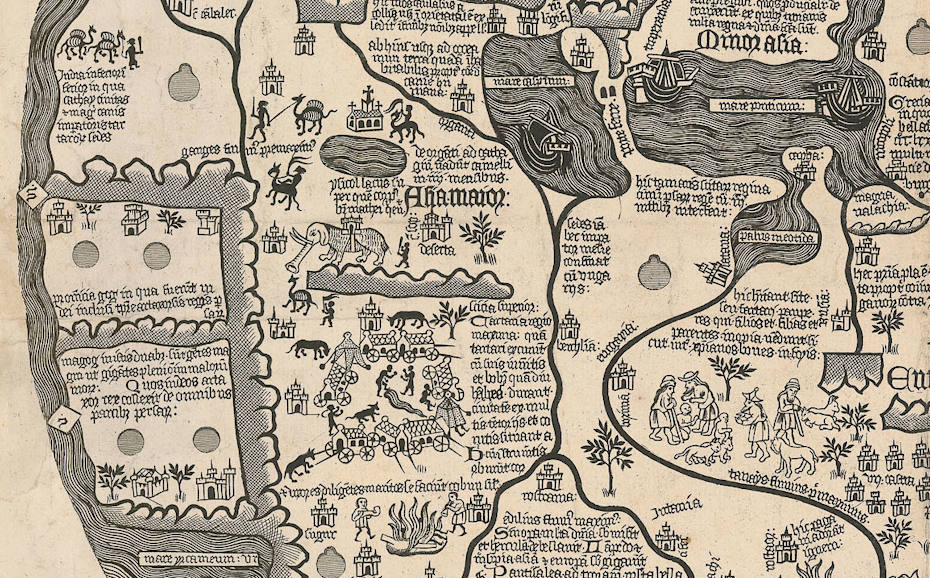 The Theatrum lesson will give rise to atlases more and more accurate and exact, like Santini (Venice, 1776) and Antonio Zatta’s four volumes (Venice, 1785). And in the following century the great work on Italy of Attilio Zuccagni Orlandini (1844): five volumes, three of them illustrating the maps by reproductions of Italy’s ancient, medieval and modern monuments. Or Naymiller’s Atlante di Geografia universale (1864), with its magnificent drawings of places and statistics data. Simultaneously publishers had gone on with travel atlases, like Bassaglia’s Nuovo Atlante portatile (Venice, 1777): more manageable and organized in order to offer quick answers to any kind of traveler. 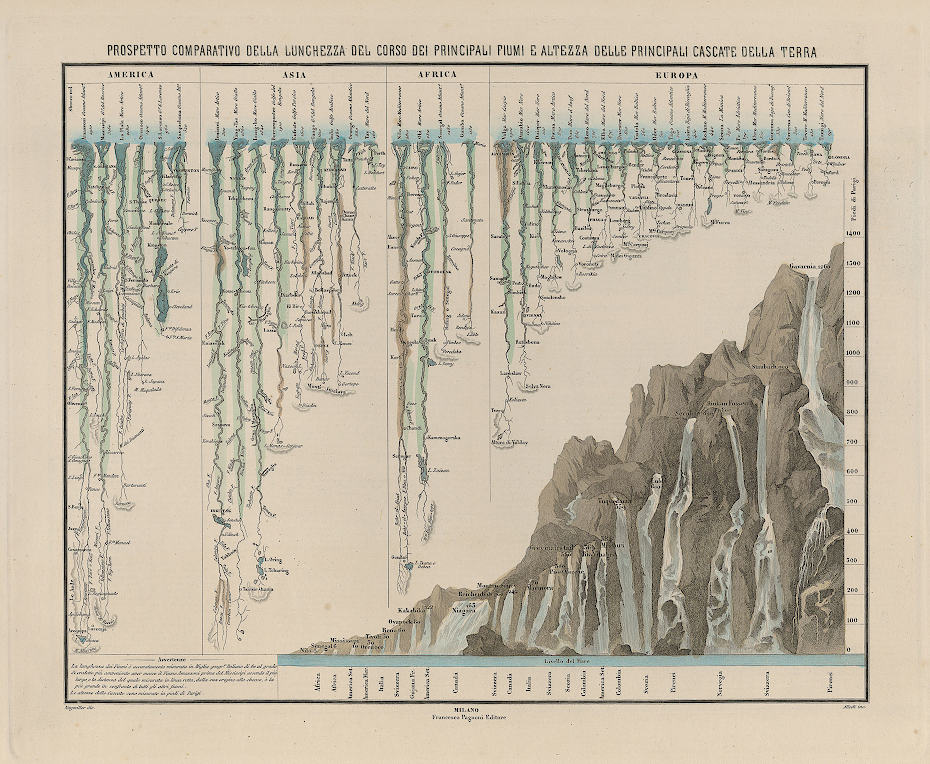 Furthermore, in front of the maps on Equatorial Africa’s expeditions of the second half of 19th century, we could have the sensation that atlas is arising under our glaze – by means of the drawing of explorers’ route and their quick annotations. While the bloom of philological and archeological studies was bringing to the creation of atlases of the ancient world more and more important for the study of classical culture – like the figures realized by Karl Otfried Müller.

Part of the collection is specifically dedicated to the Venetian area, as a contribution to the regional project Atlante Veneto: a project of recognition of documents of geographic and landscape interest preserved in Veneto’s libraries, started by Fondazione Benetton Studi e Ricerche. 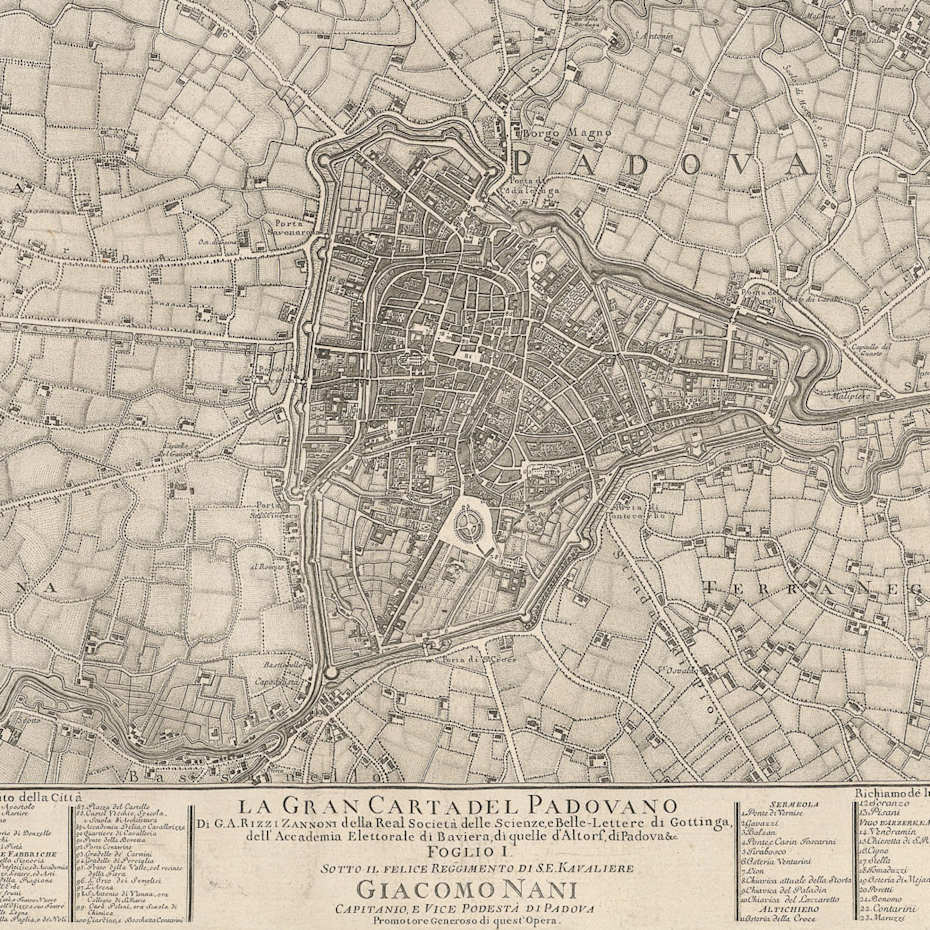 For the first time it was published in high resolution on the web the Gran Carta del Padovano by Antonio Rizzi Zannoni (1780), a Paduan cartographer and astronomer and a main figure of 18. century European cartography. And in addition collections of hydrographic and administrative maps of the Padua district, of Veneto and of the Venice’s Lagoon. To this specific topic are dedicated three atlases included in a multivolume work, edited by Giovanni Magrini, and made up by more than seventy topographic maps of the Lagoon engraved over the 19. century. Very interesting for the environmental studies are also the coast maps of Northern Adriatic, often enriched by coast landscapes and information on buildings no more existing.

All the hardcopy documents have been catalogued in SBN. From the catalogue of Paduan Library System is possible to access directly to the digital version on Phaidra repository.